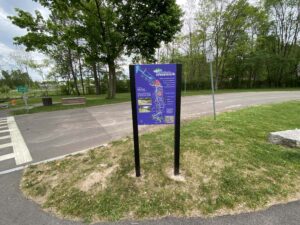 100 Black Men of Syracuse Inc. is sponsoring the Winston Gaskin Community Walk for Health & Wellness, on Saturday, September 24, 2022. The annual family-friendly event, which is being offered for the first time at Kirk Park in Syracuse, is free and open to the public. Walk participants will assemble at Kirk Park at 9 a.m. for the walk and features a 3.2-mile walk that will proceed along a recently completed portion of the Onondaga Creekwalk.

Following the formal walk, youth activities will be presented at Kirk Park in an expanded event format in which non-profit community organizations are invited to participate, distributing information about their health and youth programs and services. To sign up as a volunteer, go to https://forms.office.com/r/JGMgNxFXva.

The event, which concludes at 2 p.m., honors Winston Gaskin, an African-American Syracuse resident, pharmacist, Army veteran and community leader who passed away in 2009. The Gaskin Walk is also dedicated to raising awareness about a variety of health issues and promoting healthy lifestyles.

The news about Crouse Health follows the announcement that Critical Path Integrators and Cumulus Media had agreed to provide corporate support for the Winston Gaskin Community Walk. Critical Path Integrators is the Syracuse-based, minority owned firm specializes in audio-visual and IT installations. Besides A-V, the company, which was founded in 2013, designs and builds out network, communications and security systems for a variety of commercial clients.

The local division of Cumulus Media, the national broadcast company and owners of 93Q and 95X among several other local radio stations, had agreed to serve as a media sponsor for the Winston Gaskin Walk. As part of its sponsorship, Cumulus is donating time on its local broadcast properties to air public service announcements about the Gaskin Walk during a three-week campaign.

Also stepping up as Community Partners are:

A History Lesson: Why Our Walk Honors Winston Gaskin

Winston Gaskin was born in Kansas and served in the U.S. Army, completing his tour of duty in 1945 as a second lieutenant. He earned college degrees in chemistry and pharmacy from Virginia State College and was a practicing pharmacist for 30 years. The Gaskins moved to Syracuse in 1963. For 10 years, he operated Gaskin’s Pharmacy on South Avenue. In 1987, he was honored as a pioneer in the black community by Syracuse’s Black Leadership Congress. The congress said he became the first black druggist in the city when he opened the pharmacy in 1964.

Winston was also an insurance and investment specialist for Mass. Mutual Insurance Co. As a registered rosarian, he was an accredited judge of roses at state fairs and an active member of both the Men’s Garden Club and the Rose Society of Syracuse. Winston chaired a committee at University United Methodist Church that established the Neighborhood Linking Project, an outreach to the church‘s neighborhood. His leadership of that committee helped lead in 1992 to the formation of Housing Visions – he was co-founder – a non-profit organization that works to increase the availability of quality housing to low- and moderate-income residents throughout the city of Syracuse.